This is the first of a series of posts where I’ll walk through the process of building an event management web part for SharePoint Online. I decided to do this to go over several concepts in React and how they’re implemented using TypeScript. I go over the main points of the solution and try to walk through how I went about it. The solution is available on github.

I’m going to skip over setting up the project. There are several resources that can walk you through that process. I wrote a series a while back on quickly setting up a project that you can refer to but keep in mind that some of the details may be outdated as the packages used were older versions.

To start, I created my Event Hub project, I did a little bit of organization. Inside the components directory, I created an EventHub folder and moved my related event hub files into it. I also created a “statelessComponents” directory to separate my stateless functional components.

Inside my statelessComponents directory, I created another called “chrome” and inside of it, I created chrome.tsx. This will be a stateless functional component since, as of now, I don’t plan on managing state with it. It’s purpose is to define the apps layout and for now, it’ll simply be a top nav bar and a main content area.

Before I write anything in chrome.tsx, I’m going to install a a required package that we’ll need.

Once that’s installed, we can start building our chrome. As I mentioned, it’s role is to define the app’s layout. We’ll keep it simple and set up some placeholders. The following code is really simple. It’s just a stateless functional component so there’s no state and you can see a wrapping div, and two elements inside. The first element is a div where the top nav will appear and the main will display the contents of any component that we wrap with this chrome component.

If we decide to add more to the layout, like a footer, a left nav, or anything else, we can edit the chrome component. We’ll revisit this component later as we start build but right now, it’s enough to show a header and the contents of other components wrapped by it.

At this point, let’s go back to EventHub.tsx, which was created for us when we setup our SPFx web part. The following is the default code that appears in the class. This is where the web part’s UI is defined. We’re going to remove most of it and apply our own.

I’m going to edit this component by removing the JSX that is being returned and replacing it with some simple text wrapped by my chrome component. We need to import Chrome from our chrome component which you can see right before the class definition. Then you’ll see that I use Chrome in the return statement with some simple text. We’ll replace the text with a component later but this should be enough to have our layout produce a header and a welcome message underneath.

Running a gulp serve will open our workbench and we can drop our event hub web part to the page. Again, I assume you know the basics of creating and running an SPFx web part. The result should look like the following image. Nothing special just yet but we have Chrome.tsx defining a top nav that we’ll see regardless of what component we want to render and we can see the contents of another component rendered underneath the top nav section.

Let’s focus on the top nav bar which we’ll call the Menu Bar. I’m going to create a series of stateless functional components (SFC) to make it up. The components will be the MenuBar which will contain a logo, and navigation items.

Let’s start building these components in sort of a reverse order. Structurally, our menu will look something like:

For now, I’ll hard code a few items and start with an unordered list.

Let’s create a component for the logo. I’m going to use the office fabric’s icons for this one so we’ll need to import it. I’m importing an older version of the package because as of the time that I’m writing this, the latest version isn’t working with SPFx.

Once installed, we can create our logo component which will simply be a call to an Office Fabric icon. This component will be located under statelessComponents/Logo/Logo.tsx.

Next, we’ll bring the Logo and NavigationItems together inside the MenuBar component. This new component will be found under statelessComponents/Navigation/MenuBar/MenuBar.tsx.

Now we need to go back to our Chrome.tsx and introduce MenuBar.tsx so that we can start seeing something other than our placeholder text. Back in the Chrome.tsx, we now import MenuBar and replace our placeholder with the new element.

At this point, we have a menu bar at the top of our web part with a logo, followed by a few links. Our navigation items component has a hard coded set of links. I want to pull them out into their own component (navigation item). This SFC will change later and if you are familiar with routing in react, the href should provide a hint around what those changes will be.

The above code is defining our list item, applying a class, adds an anchor tag inside of it and assigns the url prop to the href . The title of the link is the content that this navigationItem component will wrap. We’ll see that shortly.

Now that we have an SFC for our individual items, we need to go back to our NavigationItems SFC to start using our single items. Back in NavigationItems.tsx, we will import NavigationItem and replace our links. (The names are similar but hopefully, it’s no too difficult to follow along).

After some style updates, we have a simple bar along the top of our web part with a logo made from an Office Fabric UI icon and a few links. Here are a few shots of what our project structure and web part look like.

We started with an SPFx solution and restructured the directories a little bit. I used the Component folder for our stateful components and created a “statelessComponents” folder for our stateless functional components. That’s not a common practice. I did that just for this demo because I’m using this solution to explain certain concepts outside of this blog series and naming the folders this way will probably help people unfamiliar with react remember what is in those folders.

We did make some changes to our EventHub component just so that we can see our new additions but this post focused mostly on the components that don’t maintain their own state.

In the next post, we’re going to focus on components that will handle state. These components will maintain the content and pass down the appropriate data as props. We already saw an example of that when we set up our navigation items to pass props down to the navigation item. 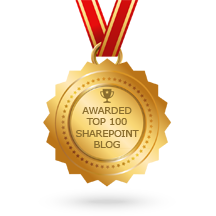